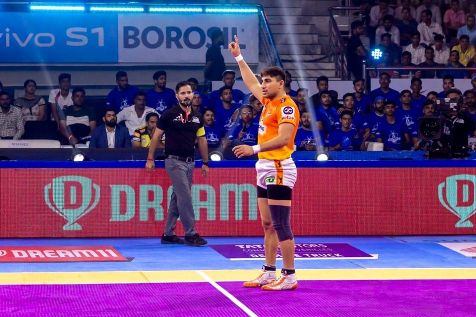 Share
1. Nitin was born on April 30, 1995, in a farming family in Malkapur village in Baghpat district of Uttar Pradesh.
2. He loved wrestling. However, he turned to kabaddi as his school, Maharshi Dayanand School, did not have adequate facilities for wrestling.
3. Nitin’s village produced many famous wrestlers. Arjuna Award winners Shokendra Tomar and Rajiv Tomar are from his village. His uncles Pralhad and Ashok Tomar have also competed in international wrestling competitions.
4. Nitin, who played kabaddi only as a hobby, did well in a school competition. Seeing his performance, his teachers advised him to pay attention to Kabaddi. Nitin also obeyed the order given by the Guru and marched towards Kabaddi.
5. Soon, at the age of 16, Nitin won a gold medal for Uttar Pradesh in the Junior National Championships.
6. In the third season of Pro Kabaddi, Nitin played for Bengal Warriors and in the fourth season in 2016, he played for Puneri Paltan. The next season, in 2017, he played for UP Yodha. The UP Yodha had taken Nitin in their team at a cost of Rs 93 lakh. The Jaipur Pink Panthers were preparing to add Nitin to their squad. They even bid Rs 90 lakh for Nitin. However, ultimately the UP Yodha won by bidding for a higher amount. This season, he scored 177 raid points, setting a record for the highest score for his team in that season.
Shortly thereafter, in 2018, he returned to his original team, Puneri Paltan. Using the buyback option, Puneri Paltan recruited Nitin for 1 crore 20 lakhs. He has been playing for the same team for the last two seasons.
7. His performances in the Pro Kabaddi for Bengal Warriors and Puneri Paltan earned him a place in the Indian team. In the Kabaddi World Cup held in Ahmedabad in 2016, Nitin came into the limelight due to the Do or Die Raid against Iran. In this match, India was two points behind Iran, while Nitin rose to the occasion and scored two points to give India an edge. India had won the World Cup and scored a hat-trick.
8. Nitin was a member of the Indian team that won the 2017 Asian Kabaddi Championship in Iran.
9. The story of how Nitin was selected in the Navy is interesting. According to Nitin’s father, Nitin had gone to Dhanora village in 2012 to play Kabaddi. High-ranking officers of the Indian Army, Air Force, and Navy were present there. After watching Nitin’s game, the officers of all the three teams proposed to him to play Kabaddi. From this, Nitin chose the Navy. Currently, Nitin is based in Mumbai due to this job.
10. Nitin’s ability to score points while suddenly increasing the speed, touching the defender with one hand, and return back is commendable.
11. Nitin says that Bhaag Milkha Bhaag and Dangal are his favorite films. He also said that watching these films inspires me.
12. When Nitin goes home, he helps his family in farming.
Share WhatsAppFacebookTwitterTelegram
You might also like More from author
NEWS