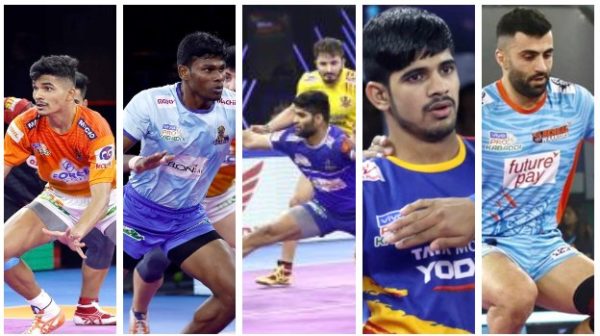 Share
The Pro Kabaddi League provided a platform for many players from India and abroad. This league gave many young players a chance to show off their skills. Some of these young players stunned everyone with their performances in the Pro Kabaddi League. Naveen Kumar Goyat, Siddharth Desai are some of them. In the seventh season of Pro Kabaddi, some such youngsters caught the attention of Kabaddi fans. This article reviews the performance of such players who were playing their first season of Pro Kabaddi.

1. Pankaj Mohite – Puneri Paltan
Leading player of Puneri Paltan Nitin Tomar was injured and Pankaj got a chance. Pankaj took full advantage of the opportunity he got. Pankaj scored 113 points in 16 matches this season. In Nitin’s absence, Manjeet was playing as the Paltan’s leading raider. Pankaj gave him the right accompaniment. Though Puneri Paltan’s journey in the season ended in the preliminary round, there is no doubt that they got a good raider in the form of Pankaj.

In the team full of star players like Ajay Thakur, Rahul Chaudhary, Manjeet Chillar, it is a difficult task for a newcomer to make an impression on the team. V Ajit Kumar, however, did it.

Most of the time, Ajit used to be the lone player of Tamil Thalaivaj on the mat after everyone getting out. Ajit, however, used to go to the opposition with great difficulty and save the team’s all-out by scoring points. This season, Ajit scored 121 points in 19 matches. Ajit’s ability to score points under pressure won the hearts of many.

3. Vinay Tewatia – Haryana Steelers
The Haryana Steelers will have to mention Vinay as a gem found in the seventh season. Vinay left a good impression while supporting Vikas Kandola and Prakash Rai. Vinay scored 129 points in 23 matches. He did well in the first match he played for Haryana. Impressed by his performance, the team management gave Vinay a chance to be in the starting seven in every match from there. At the end of the season, he was the second highest-scoring raider from the Haryana Steelers.

Aug 6, 2022
Many good players have come forward from the New Young Player initiative run by Pro Kabaddi. Sumit is also a diamond found by the UP Yodha team through this initiative. In his first season, Sumit scored 77 tackle points in 22 matches. He got along well with captain Nitesh Kumar. He also outscored his captain by scoring a total of 7 high fives this season.

The Bengal Warriors had dropped a number of old players from the team at the beginning of the seventh season. At the same time, the newcomer Nabibaksh was given a place in the team. This was a surprise to everyone. However, Nabi Bakhsh made a strong performance in the final and proved his team management right. He scored 122 points in 23 matches for Bengal this season. Of these, 92 were raid points and 65 were tackle points. This shows his all-round performance. After regular team captain Maninder Singh was injured, Nabibaksh led the team to the semi-finals and final.
Share WhatsAppFacebookTwitterTelegram
You might also like More from author
NEWS