Govind, who considers Anup Kumar as his role model, will now train under him – Exclusive Interview 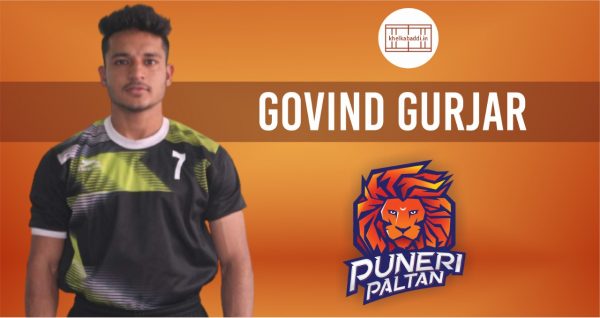 The auction of players for the eighth season of the Pro Kabaddi League started on August 29. The first day of the three-day auction saw the auction of players from the New Young Players division. In this, four players were selected by the teams in the Pro Kabaddi League. Govind Gurjar, a young player from Rajasthan, was added to the squad by Puneri Paltan. On this occasion, the Khel Kabaddi team interacted with Govind.

Khel Kabaddi – Govind, first of all congratulations on your selection in the Pro Kabaddi League.
Govind – Thank you

Khel Kabaddi – You played for Rajasthan in the Senior National Kabaddi Championship held in Ayodhya in April. You did well at the time. Based on that performance, did you expect to be selected in the Pro Kabaddi League?

Govind – My performance was definitely good. So naturally I was hoping to get a chance in pro kabaddi. My name was in the top five defenders in the Senior National Championship. I had scored 19 tackle points in this competition. So somewhere along the way I thought these numbers would benefit me.

Khel Kabaddi – You have been selected from the New Young Players category. Players from all over India were selected under this initiative. Their camp was held at Bangalore. Did you attend this camp?

Khel Kabaddi – Tell us a little about yourself.
Govind – I belong  to Shastri Nagar in Jaipur district of Rajasthan. I used to play cricket in the beginning. I loved cricket. But my father advised me to turn to kabaddi. After that, I started playing Kabaddi at the end of 2015. My father is a kabaddi player himself. Besides, my maternal uncle Rajkumar Gurjar is also an international player. So I got the basics of kabaddi at my home. Then in 2018, I played in the junior national tournament for the first time from Rajasthan. I remember playing well in this match against Tamil Nadu. However, our team lost to Gujarat in the pre-quarter final. I was then selected for the senior state tournament in the Rajasthan team. I was the top all-rounder in this tournament. This further benefited me to be selected in the Rajasthan team for the Senior National Championship. In this competition, I came forward as the fourth defender with 19 tackle points.

Khel Kabaddi – Did you have trouble leaving cricket and playing Kabaddi?

Govind – As mentioned earlier, I used to play a lot of cricket. Every single day I was out playing cricket. At the same time, my father made me realize that it is difficult to pursue a career in cricket. I followed his advice and started playing kabaddi. But the first few days I found it very strange. I was not really sure whether I wanted to pursue this further or not? But I didn’t stop going on the field, just kept playing.

Khel Kabaddi – You have become the first player from Shastri Nagar to join the Pro Kabaddi League. What do you want to say about it?
Govind – It is a great thing for me to get such respect from my village. After I was selected yesterday, many people from my place appreciated me very much.

Khel Kabaddi – Who has supported you throughout this journey?
Govind –  My parents are always with me. I was always guided by my early coach Rajnarayan Sharma in Kabaddi. Currently I am practising under Dr. Dinesh Chaudhary.

Khel Kabaddi – You took Anup Kumar’s name as your role model. Now you will get his guidance. What do you think about it?
Govind – I never thought that Anup Kumar would be my coach. This is a pleasant surprise for me. I can learn a lot from him.

Khel Kabaddi – How are you currently preparing for Pro Kabaddi?
Govind – Right now I am focusing more on my own fitness than the match practice. I am taking care of not getting injured before the start of the season. In addition, I am also following a proper diet.

Khel Kabaddi – Your kabaddi career is getting started now. What is the goal going forward?
Govind –  I have the same goal as all other players. I want to play kabaddi for India. My coaches are constantly guiding me for this. Apart from this, Rajasthan Kabaddi Association also continues to support the players. I played with Deepak Hooda in the Senior National Championship. At first, I was reluctant to talk to him. But he supported us very well throughout the tournament. He is always available to guide us from time to time.