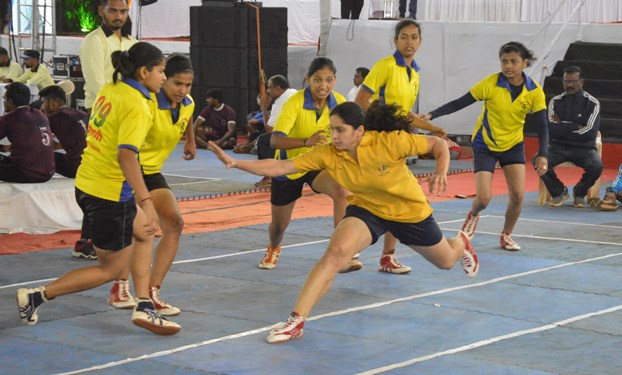 On the fifth day, semifinal matches were played here. In the first semifinal of men’s section, Shahu Sadoli Kolhapur suffered the loss in the hands of NTPC Nandurbar 29-24. They led the first half as 10-08. Suraj Desai, Dada Awad in raiding and Shubham Barmate, Abhijeet Chavan in defence were fabulous for them. Whereas Amit Patil, Swapnil Belhekar and Vivek Bhoite of Shahu Sadoli Kolhapur tried their best. But could not succeed.

Talking about girl’s section, Rajmata Jijau team from Pune thrashed Hanuman team, Bachani, Kolhapur 48-16 They had full dominance on the game as they led the first half 27-08. Sayali Keripale, Namrata Shilimkar raided well. Ankita Jagtap went for some good tackles. Asawari Khochari, Mrunali Tonape in raiding and Prajakta Desai in defence put a great show. But could not make their Hanuman team, Bachani win.

In the second semifinal, Shivshakti team defeated Suvarnayug team 35-15. They also had a lead 17-09. Sonali Shingte and Raksha Narkar gave a splendid performance for Shivshakti. Though Sonali Ingale played well for Suvarnayug team her efforts went into vain.