Pairs of brothers in Pro Kabaddi 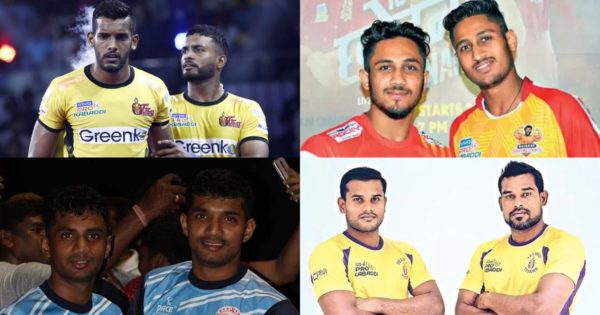 It’s been almost six years since the Pro Kabaddi League started. The league broke all records of popularity from the first season. This league gave many new players the opportunity to make a career in kabaddi. There are some players who are brothers to each other. This article is an attempt to shed light on the pairs of brothers in Pro Kabaddi

1. Nitin Madane and Krishna Madane
The eldest of the Madane brothers, Nitin played for the Bengal Warriors in the first season of Pro Kabaddi. He did well this season, scoring more than 100 raid points. Injuries forced Nitin to miss the second and third seasons. In the fourth season, he made a comeback from U Mumba. He has not had a second chance in pro kabaddi since playing for Mumbai in the fourth and fifth seasons. Last year Nitin had taken 9 points in a single raid while playing in a local tournament. The video of that raid went hugely viral. So maybe next season Nitin Madane is likely to appear in pro kabaddi again.

Nitin’s younger brother Krishna made his debut for the Bengal Warriors in the third season of Pro Kabaddi. But he only got one match to play. He made his comeback from the Telugu Titans in the sixth season. He did well this season as a substitute and was retained in the squad for the seventh season. He has scored 16 tackle points in 12 matches this season.

2. Sunil Malik and Sumit Malik
Everyone knows Sunil as the captain of Gujarat Fortune Giants. However, Sunil’s younger brother Sumit has also played for his team. Sunil plays as a cover for the Gujarat team. His and Parvesh Bhainswal’s duo is famous among kabaddi fans. Sunil has also represented India. Sumit is the youngest of the two and made his debut in the Pro Kabaddi League last season. He played 15 matches for Gujarat. Sunil has been playing for Gujarat since the fifth season. He has been the captain of the team since the sixth season.

3. Dharmaraj Cheralathan and Dharmaraj Gopu
Dharmaraj Cheralathan, better known as Anna, and his brother Dharmaraj Gopu made their debut in the first season of Pro Kabaddi. Anna started his pro kabaddi career from Bengaluru Bulls and Gopu from Telugu Titans. Gopu didn’t get much chance after the first season. Anna, however, played all seven seasons of Pro Kabaddi. In these seven seasons, he has scored 302 points in 118 matches. He averages 1.98 tackle points per match. Anna has also won the Pro Kabaddi title from Patna Pirates.

A kabaddi fan who doesn’t know Siddharth and Suraj Desai from Maharashtra is hard to find. The elder brother Suraj was picked by the Jaipur Pink Panthers in the second season of Pro Kabaddi. However, he did not get a chance to play in a single match this season. In the fifth season, he was given a chance by Dabang Delhi but this time also he did not get to play the match. Finally, in the seventh season, the Telugu Titans gave him a chance once again. Suraj took advantage of this opportunity and scored 45 points in 12 matches.

Siddharth had literally taken kabaddi world by a storm during his debut season. In the sixth season, he scored 221 points. He then became the most expensive player in pro kabaddi in the seventh season. He also scored 220 points for the Telugu Titans this season.