PKL 7 Performance Series: Naveen Kumar vs Siddharth Desai, how do they fare? 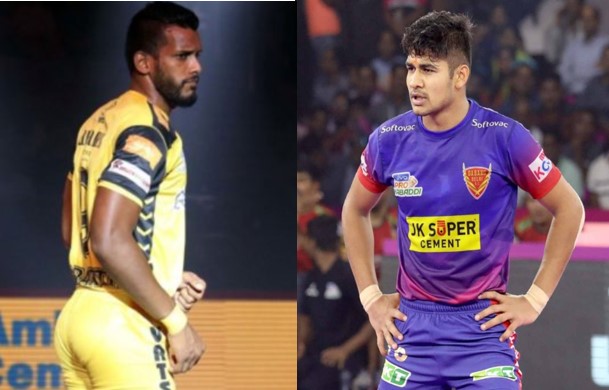 Naveen Kumar Goyat and Siddharth Desai both have been successful in grabbing attention of Kabaddi fans. They have given stellar performances so far in Pro Kabaddi. Naveen even helped his team to reach finals last season. He was a star performer for them throughout the season. Siddharth though has been amazing individually, has not been able to guide his team to winning path.

In this article, we will look at last season player-wise performances with multiple metrices through an analysis.

In above chart, we can see that Naveen played 23 matches for his team Dabang Delhi. This gave him extra advantage over other raiders to show his skills into the playoffs and eventually become the 3rd top scorer of PKL Season 7 with 303 as total points. His tally includes 251 successful raids, 301 raid points, 36 do or die raid points, 2 super raids, a whopping 22 super 10s with an average raid point of 13.09. This shows us his ability to score points and contribute to the team consistently. Out of 23 matches he scored Super10 in 22 which again displays his potential to dominate and turn the games as a win in the end. Since his debut, he has broken lots of records in the PKL history. One of them is most raid points in the 1st 10 minutes of the game.

From the above chart we can see that Siddharth played 22 matches for his team Telugu Titans. That’s 1 match less as compared to Naveen Kumar. He made his debut in season 6 of PKL for U Mumba and made multiple records in that single season itself. When it comes to skills, his signature move is known as running hand touch in which a raider approaches to the defender in very sudden increase in speed and stretches his whole body for a rapid hand touch before running off to safety. In last season, he scored 220 total points which includes 177 successful raids, 217 raid points, 22 do or die raid points, 7 super raids, 10 super 10s with an average raid point of 9.86. As compared to his performance in season 6, last season’s performance, was not up to the mark. All eyes will be on him this season as he teams up with another star raider Rohit Kumar.