Played cricket at Kiran More Academy once, now he is a star kabaddi player from Gujarat 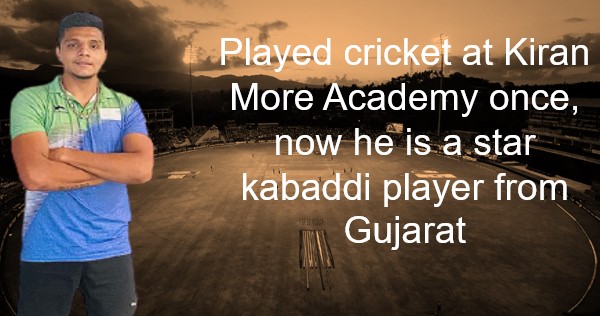 Share
Former Indian cricketer Kiran More runs his cricket academy in Baroda. India’s leading cricketers Hardik and Krunal Pandya took cricket lessons here. Another player used to play cricket in the same cricket academy. He was an all-rounder and also represented Baroda. But an accident happened and he had to stop playing cricket forever. After 6-7 months of rest after the accident, the sportsman within him did not allow him to keep quiet. He participated in the kabaddi trials that were taking place in his college at that time and performed well as well. His kabaddi journey started from there and continues to this day. To date, he has played five senior national tournaments for Gujarat. This player is Kishan Pandya from Baroda.

Earlier in 2018-19, Kishan was selected for the Indian team’s training camp for the South Asian Games. In this camp, he got a chance to play with India’s leading players Pardeep Narwal, Naveen Kumar Goyat, Pawan Sehrawat, Rishank Devadiga and Girish Ernak. Even though he was not selected in the Indian team, he still benefits from the experience gained from that camp. He was also included in the auction process for the seventh season of the Pro Kabaddi League. Although no team bid for him last year, he is hopeful that teams will bid for him this year.

Undeterred by not being selected in the Indian squad for the South Asian Games, Kishan began to work harder on himself. He gained weight and hired a fitness trainer to maintain his fitness. Leading brands Fast & Up and Zenith Sports Nutrition have sponsored Kishan. Kishan credits his success and journey to his family, his coach and his club Chittesthan Wyayamshala Trust.

Kishan’s wife is a software engineer. She has given Kishan complete freedom to pursue a career in his favorite kabaddi field. “Her continuous support helps me a lot.” Kishan said.

Kishan, who has been playing kabaddi for the last seven or eight years, is still not satisfied. He says playing kabaddi for India is his ultimate goal. For this, he has set the example of Dharmaraj Cherlatan. If Dharmaraj Anna is still a leading defender in the Pro Kabaddi League after the forties, then I am still very young and I still have a long way to go, says Kishan.

In a country like India, there are many people who are crazy about cricket. We have many parents who want their children to be cricketers. Kids also want to be cricketers. However, if something goes wrong during the journey and they have to leave cricket, it is very rare for anyone to think of making a career in another sport. Kishan deserves some serious appreciation for this. Although cricket was no more an option, he chose kabaddi. He did not just play kabaddi, but went on to represent his state in a national level tournament multiple times. That shows the quality player he is! Today, many young kabaddi players in Gujarat consider Kishan as an inspiration. They tell him that we started playing kabaddi by looking at you. This is what motivates Kishan to do even better.

Kishan is currently preparing for the 68th Senior National Championships to be held in Ayodhya in April. In the last few years, Gujarat has not been able to advance beyond pre-quarters of the national tournament. Kishan has decided to take his team to the quarterfinals and semifinals this year if he makes it to final 12 of the Gujarat team.