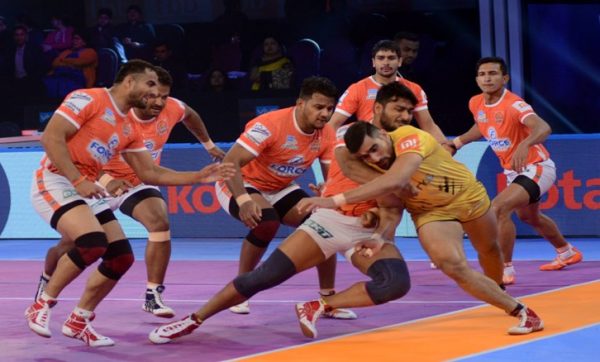 Pune: Puneri Paltan ended their campaign with a thumping win as they beat Telugu Titans 35-20 in Vivo Pro Kabaddi Season 6. GB More led the raiding charge for Pune with 10 points while Ravi Kumar and Girish Ernak did the damage in defence. Rahul Chaudhari had a disappointing game for Telugu Titans and scored just one point from 12 raids. The defeat dented Telugu Titans hope of making the playoffs and are almost out of contention.

GB More scored two raid points in two minutes as Telugu Titans led 2-1. Telugu Titans were struggling to get points on board early in the match and trailed 2-7 after seven minutes. Puneri Paltan then inflicted an all out to lead 10-2. With Rahul Chaudhari and Nilesh Salunke not putting points on board, it looked like an uphill struggle for Telugu Titans as they trailed 3-11 after 10 minutes.

Telugu Titans then scored four consecutive points as they reduced the gap to 4 points after 13 minutes. A super tackle in the 15th minute restored the advantage for Puneri Paltan. At the end of the first half, Puneri Paltan led 17-10.

The second half followed the same pattern as the first with Chaudhari trying hard to revive Titans but Pune defence did a fine job on him. Farhad Milaghardan made a two-point in the 26th minute as Titans trailed 14-20. Puneri Paltan in the next six minutes scored 6 straight points to lead 26-14.