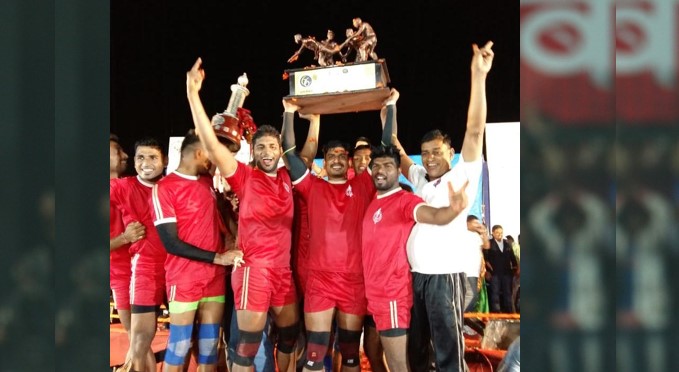 The 66th Senior Group State Men’s and Women’s championship was recognized by Maharashtra State Kabaddi Association and was organized by Nashik District Kabaddi Association and Sahyadri Yuva Manch. Men’s final match was amusing one. Sangali’s Nitin Madane was successful in scoring raid point in his very first raid. It was his courtesy that Sanagli was close to inflict an all-out on Raigad.

But they lost their patience in defense when only one and last player of Raigad was left on the ground. He scored Bonus point and two touch points which brought Raigad back in the game. Though Sangali then after got Raigad all-out and came up with lead over them 19-16 at 18th minute. Till the end of first half Sangali was in the lead 22-20.

The second half started with Raigad return the all-out inflicted on them and came up with lead over Sangali 26-22. After this it was all about Raigad’s game. When last 5 minutes were left Raigad had a lead 35-28. Sangali’s Nitin Madane got Yellow Card (2 minutes suspension from the game) by the umpire Sachin Nakti due to arguing with him. Also Raigad did 5 crucial Super Tackles. Out of those five 2 was of Nitin Madane. His tackles and Yellow Card costed Sangali very badly.

Raigad’s Sultan Dange got 3 Bonus points and 3 tounch points from his 18 raids. He got tackled only once. Momin Sheikh grabbed 5 raid points from 13 raids and got out for three times. Sanket Bankar went for 3 tackles. Out of his 3 tackles 2 were Super Tackles. Mitesh Patil had 3 tackles to his name. Rahul Wadar of Sangali scored 6 raid points from 15 raids. Nitin Madane clinched 2 Bonus points and 5 touch points in his 15 raids; got tackled for four times.

Raigad won this championship after 17 years. In 2001 they cliched victory over Pune in Baner, Pune. In the championship held at Wadala, Mumbai in 2002 they suffered a loss in the hands of Mumbai Suburb. This is their fourth title and they are the runner-ups for 2 times. In this 66th Senior Group State Men’s and Women’s Championships, even after trailing in the first half Raigad has been successful in winning the Pre-Quarter Final, Quarter Final, Semi Final and Final due to their agressive game in the second half.

Talking about Women’s category Pune won the title by beating Mumbai Suburb. It was like a revenge for Pune as Mumbai Suburb ended their dominance of 10 years in the last year’s championship. At the end of the first half Pune has a lead over Mumbai Suburb 10-08. Then match turned in Pune’s favor.

Pune’s Snehal Shinde showcased her skills with 5 raid points in 12 raid attempts and 2 tackle points. She got tackled for 2 times. Sayali Keripale scored 2 Bonus points ans one tounch point in her 7 raid attempts. She also did 3 tackles. Ankita Jagtap had 4 successful tackles. Out of those 4, one was Super Tackle.

Mumbai Suburb’s Komal Devkar grabbed 9 raid points from 18 raids and got out for sixth times. According to Pune’s coach Mohini Chafekar-Jog It was a strategy of keeping Komal Devkar away from game as she was their strike raider. Sayli Nagwekar got only 2 points in her 9 raids and sent on the bench for 2 times. Rani Upahar got 3 tackle points. But all these efforts were not enough to win the game for Mumbai Suburb.