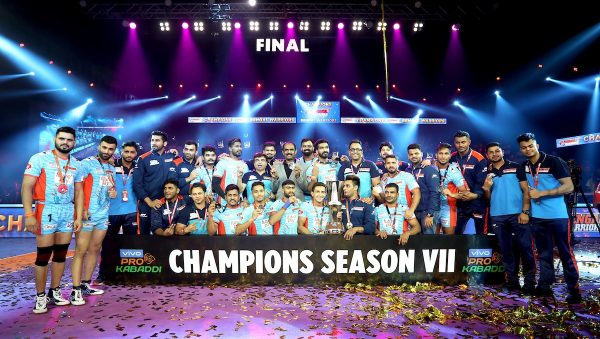 Mumbai, 9th April 2020: The COVID-19 pandemic has halted all sporting events across the world leading to a dearth of live sports content. Star Sports, India’s leading sports broadcaster, is giving fans the opportunity to relive some of kabaddi’s most iconic moments; from India’s 2016 World Cup victory to nail-biting matches in Vivo PKL 7. Get ready to be glued to your screens as Star Sports showcases all the memorable matches Everyday starting Saturday, 11th April, at 10.30 am on Star Sports 2 and Star Sports 3.

From Pardeep Narwal’s magical Dubkis to Naveen Kumar’s daring raids, Fazel Atrachali’s powerful tackles, Pawan Sehrawat’s hi-flying moments and who can forget Maninder Singh’s impeccable season that won Bengal Warrior’s their maiden Vivo Pro Kabaddi title – Stars Sports is letting fans look back on some the best moments of the Heroes of VivoPKL 7. Not only that, fans will also be able to catch some of Season 7’s most thrilling matches, as well as an exclusive show on current champions, Bengal Warriors.

Star Sports has also lined up the best matches from India’s victorious 2016 Kabaddi World Cup campaign titled ‘India’s road to Glory’. Kabaddi fans across the country have been reaching out on digital platforms ever since Star Sports began broadcasting the winning moments of the Cricket World Cup.  After suffering a shock defeat to the Republic of Korea in their opening match of the Kabaddi World Cup, India, led by captain cool, Anup Kumar, rallied back, stormed to the finals and clinched their third World Cup in stunning fashion against Iran.

Watch Star Sports 2 and Star Sports 3 daily at 10.30 am starting 11th April to enjoy the best kabaddi action in the world.