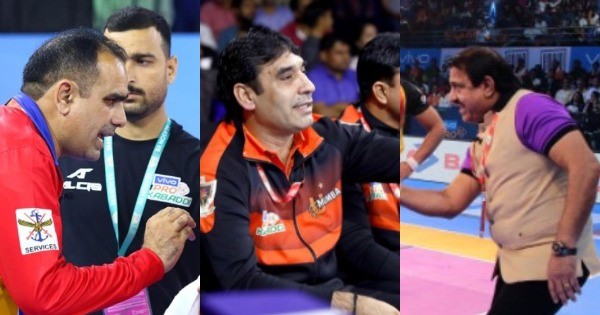 Coaches are responsible for training athletes in a sport by analysing their performances, instructing in relevant skills and by providing encouragement.

Similarly, in kabaddi the coaches create the right conditions for learning to happen and help the players to polish their skills.

In this article we will talk about the coaches of PRO KABADDI TEAMS for PKL SEASON 8.

A well known name in the field of kabaddi, Randhir Singh has been a gem to Indian Kabaddi.

He has produced 5 Arjuna Awardees under his training & was nominated for Dronacharya Award from the Railways sports control board in the year 2011.

Randhir Singh is Asian Games gold medalist with Indian national kabaddi team (1990 Asian games). He was awarded by the prestigious “Arjuna Award” in the year 1997 for his contributions in the field of kabaddi.

Talking about his PKL coaching career, he has been guiding Bengaluru Bulls from PKL SEASON 1, which is an achievement itself. Under his coaching, Bulls reached in the finals of PKL 2 & was able to clinch the trophy in PKL SEASON 6.

Jagadeesh Kumble has been part of the coaching panel of Bengal Warriors in PKL 5 & PKL 6.

Jasveer Singh is a former kabaddi player who played from army team later he also trained the army kabaddi team.

Jasveer Singh was appointed as the coach of UP Yoddha in PKL 6. He also continued to train the team in PKL 7 in which UP Yoddha finished 3rd on the points table.

Sanjeev Baliyan has been a two times Asian Gold Medalist with Indian National Kabaddi team (1998 Asian Games & 2002 Asian Games). He was awarded by the prestigious “Arjuna Award” in the year 2003 for his contributions in the field of kabaddi.

He successfully guided Patna Pirates to the title victory in PKL 3.

Under his coaching, U MUMBA reached the playoffs in PKL 7.

A former PKL player who will be making his PKL debut as a coach in PKL 8, RAJAGURU has won gold medal with Indian National kabaddi team in 2014 Asian games.

He was awarded by the prestigious “Dronacharya Award” in the year 2020 for his contributions in the field of kabaddi.

Under his coaching Delhi made it to playoffs in PKL6 & reached in the finals of PKL7.