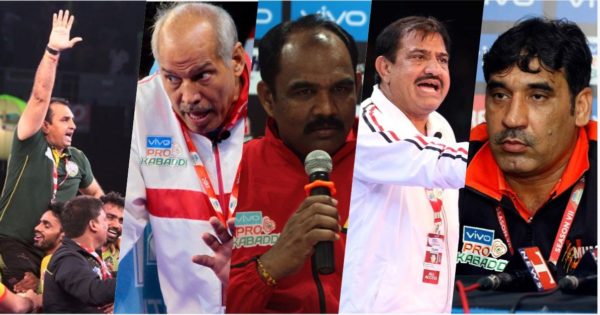 Share
If any team wants to be successful, it is not sufficient to have only good players. It also needs a good coach to use the potential of those players to lead the team to victory. If a team wins, the coach of that team is appreciated along with the players. The beginning of Pro Kabaddi opened the door of opportunity for many players as well as coaches. Many such players who played for India are currently working as coaches in Pro Kabaddi.
This article is an attempt to shed light on some of the coaches who have been successful on the field as a player and have now led the team to victory  in PKL
1. Ram Meher Singh (Patna Pirates) – As a player, Ram Meher Singh did well for India in the nineties. While playing for India, he won a gold medal at the 1998 Asian Games. Four years later, as captain of the Indian team in 2002, he led the team to another gold medal at the Asian Games. He was honored by the Government of India with the 2002 Arjuna Award for his contribution to the field of Kabaddi. The Haryana government also honored him with the Bhim Award.
Ram Meher Singh started his coaching career in 2004. He won national championships for three consecutive years while coaching the Air Force and Services team. He has also served as a member of the Indian team’s national selection committee for five years.
Under his guidance, the Patna Pirates won the Pro Kabaddi League in season 5. Before Ram Meher Singh took over as the coach, Patna had won two consecutive titles. So naturally, there were high expectations from the team management. Singh, as a coach, led the team to their third consecutive title.
2. Balwan Singh (Jaipur Pink Panthers) – Balwan Singh has won gold medals at the Asian Championships and South Asian Championships as a player. He won a total of nine gold medals as a player in the twelve years from 1981 to 1993. Going forward, as a coach, he helped India win three World Cups and three Asian gold medals. He was honored by the Government of India with the Dronacharya Award in 2005 for his contribution to the field of Kabaddi. The Jaipur Pink Panthers won the first season of the Pro Kabaddi League under the guidance of Balwan Singh.
Related Posts

Jun 29, 2022
3. BC Ramesh (Bengal Warriors) – As a player, BC Ramesh had won gold medals for India in the 1998 and 2002 Asian Games. He was honored with the Eklavya Award by the Government of India in 1999. He was also a member of the 2004 Kabaddi World Cup-winning teams. He also led the Indian Kabaddi team for three years from 2004 to 2006. He was honored by the Government of India with the Arjuna Award in 2001. He also coached Argentina in the 2016 World Cup.
In the Pro Kabaddi League, Ramesh coached the Puneri Paltan and the Bengaluru Bulls. Earlier in 2015, he was the assistant coach of the Bengal Warriors. In the seventh season of Pro Kabaddi, he took over as the head coach of the Bengal Warriors. This time, he surprised everyone by taking a bold decision not to retain big players like Surjit Singh and Ran Singh. Instead, he added players like K Prapanjan, Rinku Narwal, and Mohammad Nabibaksh to give the team its first title.
4. Randhir Singh (Bengaluru Bulls) – Kabaddi was included in the 1990 Asian Championships in Beijing. Randhir Singh was a member of the team that won the gold medal in Kabaddi. Singh says he has won a total of 40 medals, 20 as a player, and 20 as a coach.
The Bengaluru Bulls are the only team in Pro Kabaddi to have retained a single coach from the first season to the seventh. That coach is Randhir Singh. Singh did well for India as a player. The Government of India honored him with the Arjuna Award in 1997. He was also nominated for the Dronacharya Award in 2012.

5. Sanjeev Baliyan (Patna Pirates) – Sanjeev Kumar Baliyan is known as the captain of the Indian team that won the first Kabaddi World Cup. As a player, he made his debut for the Indian Police in the 42nd Senior National Kabaddi Championship in 1994. Soon he started playing from the railways. Playing for the Railways, he led his team to gold medals in 1998 and 2001. From India, he played in the 1998 Bangkok Asian Games and the 1999 South Asian Games. He successfully led India to the inaugural Kabaddi World Cup in 2004 in Mumbai. In the final match against Iran, he scored 17 points in 16 raids. He was honored by the Government of India with the Arjuna Award in 2003 for his outstanding achievements in the field of Kabaddi. As a player from Railways, he won the best player award five times.

After retirement, he also worked as a railway coach. Under his guidance, the Railways won gold medals in the 66th Senior National Kabaddi Championships held last year and the 67th Senior National Kabaddi Championships this year. As a coach in the third season of Pro Kabaddi, he led the Patna Pirates to the title. Last year, U Mumbai appointed him as their coach.