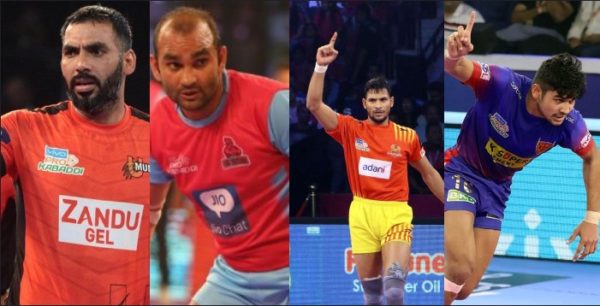 We often read and hear the news mentioning that ‘India’s defeat, Dhoni’s lone struggle!’, ‘Rohit’s century goes in vain, India lose’.
In team games, individual performance is important, but if the entire team does not play together, some matches can be won on the strength of individual performances, but not in major competitions. And if a team loses, individual performance is of no importance. This has happened many times in the history of Pro Kabaddi. A raider does a Super Ten or a defender completes the High Five, but his team loses. Notably, this has happened in 5 of 7 finals of the Pro Kabaddi League. Who are those players who have done ‘Super Ten’ but their team could not win the championship.

The first season started with a match between these two teams and the same teams clashed each other in the final as well. Anup Kumar’s U Mumba easily defeated Jaipur Pink Panthers in one of the first two matches between the two teams and the other match ended in a draw. Both the Jaipur Pink Panthers and U Mumbai were ranked first and second respectively, so the match was likely to be tense. However, the combined performance of Maninder Singh, Rajesh Narwal, and Jasvir Singh did wonders for Jaipur. Anup Kumar tried to fight the lone battle. Anup scored a total of 10 points in 21 raids in this match but he could not get the support of the rest of the team and U Mumba had to go down to Jaipur Pink Panthers. It is noteworthy that Anup Kumar’s Super Ten was the only Super Ten of the match, but on the strength of team performance, Jaipur defeated U Mumba 34-22.

Jasvir Sing, known for starting his raid slow but surprising opponents with a sudden increase in his speed also could not help Jaipur Pink Panthers win this season. He scored13 points in 21 raids, but Pardeep Narwal on the other side also scored 16 points. In total, Jaipur scored 21 raid points while Patna scored 20 raid points. But the defense of Patna was too much for Jaipur to handle and was the differentiating factor of this game. Ultimately Jaipoor lost the game despite Jasveer’s super 10.

Under the guidance of coach Manpreet Singh, the Gujarat Fortune Giants made it to the finals in their debut season with a stellar performance. Notably, they had defeated Patna Pirates twice in league games. So it was expected by many fans that they will win against Pirates. Manpreet Singh had earlier said that our defense is strong enough to stop Pardeep Narwal. But in reality, something different happened. Gujarat surrendered to the whirlwind of Pardeep Narwal and Monu Goyat. Patna defeated Gujarat by a margin of 55-38. However, Sachin Tanwar, an emerging player, caught everyone’s attention with his good performance in this match. Tanwar battled alone with 11 points in 15 raids, but of course, he failed to bail his team out!

Gujarat reached the final for the second time in a row, setting aside the defeat in the final match of the fifth season. Gujarat entered the final with the intention of not letting go of the last chance. The match was tense until the end. Sachin completed his Super Ten once again. With just 4 minutes left, Gujarat had a lead of 2 points. However, in the last 4 minutes, Gujarat’s dream of winning the title was lost once again in the storm called ‘Pawan Kumar’. Bulls won the game with a difference of just 4 points and Sachin’s Super 10 went in vain once again.

This is probably the most surprising name on the list. Naveen, who was only playing his second season, had literally set the record for the most Super Ten this season. He made a whopping 22 Super 10s this season. Out of these 22, 21 Super10s were scored in consecutive games. In all the matches he played, he scored a Super10 in all with the exception of one match. The final match was no exception. He scored 18 points in the final game but it was not enough for his team to win the title. Delhi had more raid points than Bengal but their defense was not up to the mark. That is why in the last 4 minutes, despite Naveen’s battle, Delhi had to face defeat!